What Is Paleo Jerky? 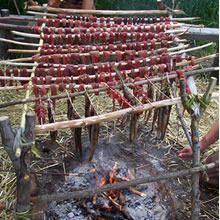 For centuries it has been used to preserve meat for long periods of time.

The oldest known Jerky was found in a tomb near the village of Wanli in China - it was dated to 2000 years old !!!!

Jerky became popular with Europeans when they traded with the native Americans as they explored the country. The fact that it did not need to be refrigerated and was light to carry added to its appeal.Fur trappers, Cowboys, Soldiers and Voyagers all used it.

Jerky is NOT Biltong. Biltong is cut into 1” square strips then cured with salt and vinegar before taking 3-4 days to air dry.

Jerky is cut into thin strips and dried using heat. Traditionally it was hung on horizontal wooden rods supported by a frame and set around a fire and in warm climates it was hung out in the sun to dry.

Nowadays it is marinated for up to 24 hours at less than 5 degrees C then hot air dried at 70 degrees C for 6-8 hours in a temperature controlled environment before being allowed to cool prior to packing.

Jerky is the perfect snack food as it contains 70% protein and 10% fat.

“PALEO” is a shortened form of “PALEOLITHIC” meaning the Stone Age –from 2.5 million years ago to 10,000 years ago.

“PALEOLITHIC” is from the Greek “Palaios meaning Ancient and Lithos meaning Stone. The term was coined by an archaeologist named John Lubbock in 1865.

Nowadays there is a trend to adopting the diet od a Stone Age man or Hunter/Gatherer which is, broadly speaking, to eat fresh veg and fruit, with minimal cooking to maximise the nutritional value as well as fresh meat.

The use of Grains and Dairy products is firmly rejected as these are the staples of a settled lifestyle which is traced back to domestication of animals and the harvesting of wild grain in the Fertile Crescent around 12-10,000 years ago, which many recognise as the downward spiral in health as it leads to less movement and more leisure and as a consequence weight gain and obesity.

Jerky was a method used to preserve a lot of meat from a large kill and to keep it safe to eat through the winter. As long as Jerky was kept dry and cool it was fine for months.

To re-hydrate it, all that is needed is to put it in water, sufficient to replace the original water removed by the initial process. Now it can be cooked and combined with other foods just like fresh meat.

An early method of cooking was to fill an earthenware or stone pot with water, add the meat and any other root or leaf veg available and drop in stones heated in a fire. As the stones transferred their heat to the water-it boiled. Now as all good cooks know,you don’t boil everything all the time, so temperature was controlled by how often the heated stones were added - little and often gave a simmer.

Sometimes a leather bag was used as a pot, but one needed some vegatables on the bottom, or the hot stones could burn a hole in it and you lost your dinner to the dogs!! Guess who would not be popular!

Care had to be taken as to which stones were selected - those from river beds may hold water inside them and explode when heated - nasty!

Each kill had to have its own set of stone/flint tools knapped for it to cut it up. An archaeologist told me it was to do with “Ritual”. ”Utter Rubbish !” I said, ”How else could they avoid contamination from bacteria from the last kill?”

There were no dishwashers around then so they learnt by their mistakes, they could not know of bacteria and viruses but they might call them evil spirits.